Following the various comments at recent meetings regarding speeding vehicles, may I assure fellow Councillors that the Speed Watch team in Buckley/Mold/Mynydd Isa area is very active. In fact we have been assured and complemented by North Wales Police (‘NWP’) that we are the most active group in North Wales.

We are usually active at least four times a week in various locations throughout the area.

Whilst noting comment on possible locations from members of the public, we have to stick to sites checked and approved by NWP.

We do occasionally add new sites, but have a fairly wide range of local sites and monitor particularly “hot spots”, where we know there is a problem of speeders.  This particularly applies to sites in vicinity of local schools.

In late January, in conjunction with the Go Safe team,we had a concentrated day in Buckley. They worked on four sites and we monitored five others. During the day, over two hundred speeders were noted.

Unfortunately, as we are not Warranted, only a mildly worded letter is sent out to speeders we note. If a Warranted Police Officer is present, then a ticket may be issued.

There is also some legal ambiguity in the use of the Speed Guns that we are issued with, in that their evidence may not be used for prosecution. The Go Safe team and Police cars have laser guns which are accepted in a Court.

Our guns are accurate and regularly checked. 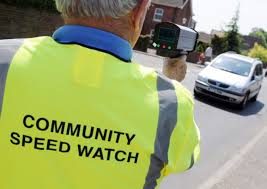